The International Symposium on Food Safety Standards and Risk Management was co-organised by the main United Nations international organisations leading food safety and nutrition files namely the United Nations Food and Agriculture Organization (FAO) and the World Health Organisation (WHO), represented by Dr. Ren Wang and Dr. Keiji Fukuda, Assistant Director Generals of FAO and WHO respectively. The Symposium was also supported by the World Bank’s Global Food Safety Partnership (GFSP). It was hosted and co-organised by China’s Food Safety Risk Assessment Centre: CFSA. The symposium was held in Beijing from March 27-28th, 2014. 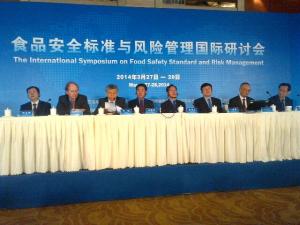 The symposium was opened by Vice Ministers of China’s ministries leading food safety, namely China’s Food and Drug Administration (CFDA), the National Health and Family Planning Commission, the Ministry of Agriculture, and the Food Safety Office of the State Council. Opening remarks were also made by Senior officials from WHO and FAO, as well as the World Bank’s Director of the Agriculture and Environmental Services Department. The Symposium was chaired and moderated by officials of FAO and WHO as well as Dr. Liu, Director General of CFSA.

This international symposium allowed an opportunity to discuss the following topics:

The symposium was also an opportunity to share best practices in anticipating, responding to and communicating about food safety challenges by industry and governments representing organisations in China, Europe, North America and the Asia-Pacific region